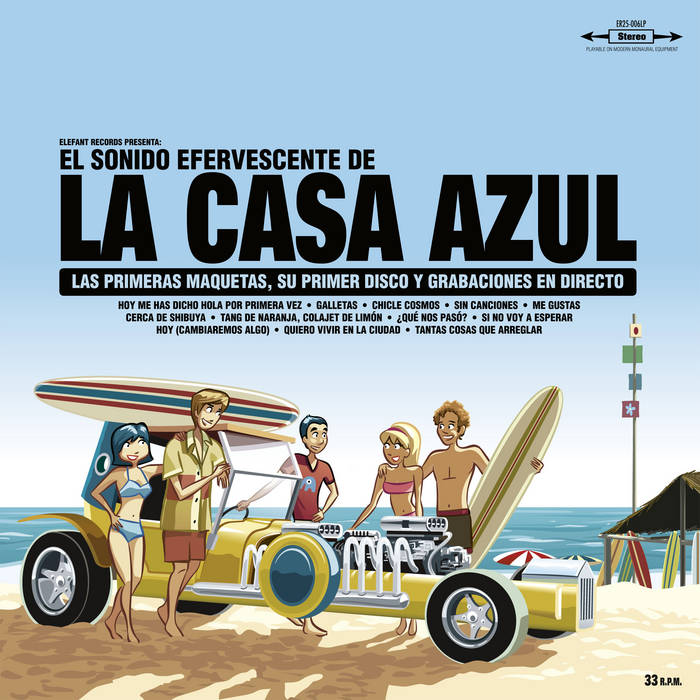 In honor of our twenty-fifth anniversary in 2014, we told you that we were going to celebrate it by re-releasing some of our most representative albums from these first 25 years of Elefant Records, as well as offer some exclusive releases. There will be 25 releases, including a documentary about the label, as well as a book. The re-releases of FAMILY’s “Un Soplo En El Corazón” and LA BIEN QUERIDA’s “Romancero” have already come out, and we’ve also released a very special homage to FAMILY’s legendary album. Now three new releases have arrived from this unique collection that, little by little over the next few years, will be completed.

First, that masterpiece, the beginning of a legend. In October, we are releasing LA CASA AZUL’s first album, “El Sonido Efervescente De La Casa Azul”, again. But we’re not just releasing it, we’re pulling out all the stops: on this double vinyl, we are including all the demos and takes that we included in the previous re-release on CD, and on top of that we’re adding six live songs recorded at a party for the radio program “Viaje A Los Sueños Polares” in Madrid’s Aqualung club in May, 2000. That’s 27 songs total for a really juicy re-release that also celebrates the 15th anniversary of the original release of an album that made so many things happen. In November, we are re-releasing “Fonorama”, COOPER’s first full-length album. It is an impeccable collection of songs that showed pretty clearly what line Álex Diez’s post-FLECHAZOS career was going to follow, and which, ultimately, identified a sound that has always been his own. This vinyl re-release will also include two tracks previously unreleased in this format (“Sara Tiene Un Secreto” and “Canción de Cuna #2”), and which were previously available on the CD-Single “Vértigo”, but had never been released on vinyl before. November will also be the month for the re-release of LE MANS’ “Entresemana”, their second album and one of the albums we definitely feel most proud of. This re-release felt necessary: songs like “Perezosa Y Tonta”, “Con Peru En La Playa” and “Mejor Dormir” seem like they were created to feel their notes played by the needle of a record player, like a summer sunbather who lets the sand at the beach caress their back. That is why we thought it was important for this album to be released in this format, and remastered.

And in the coming months we will have re-releases from LA CASA AZUL, NIZA, THE SCHOOL, LOS FLECHAZOS...

We kind of get goosebumps when we listen to this album. Guille Milkyway is currently one of the most admired and respected figures on the national pop scene, who has followed a long path full of anecdotes, stories, and more importantly, songs and great concerts. All of this basically started with “El Sonido Efervescente De La Casa Azul”. Those eight songs have grown over the years and over their various re-releases, but neither the various demos nor the live songs we’re adding now from Aqualung club Premios Polares awards ceremony in 2000 detract from the overall identity. What’s more, they confirm the state of grace of an artist who has never left that state. That album was... One of them, of the many that came later.

That introduction that only whet our appetites for what was coming - the unquestionable, incomparable hits like “Cerca De Shibuya” and “Chicle Cosmos”, the danceable, bubble-gum pop with a touch of ye-ye of “Hoy Me Has Dicho Hola Por Primera Vez”, “Sin Canciones” and “Me Gustas”, the Bacharach-esque harmonies of the exquisite “Bonus Track”, or the unforgettable luminosity of “Galletas”. There are immortal choruses, para-pa-pa-pas, incredibly inspired and fun lines (“Sin tu amor / Los Fresones son puro AOR” (“Without your love / Los Fresones are straight-up AOR”); “Tú me gustas / Y sé que el tiempo / Te hará ver que en realidad / No soy tan feo”(“I like you / I know with time / You’ll see that really / I’m not so ugly”)), clapping rhythms... And then came the many other delicacies recovered from the two legendary demos that became an open secret on the national scene: “Tang De Naranja, Colajet De Limón”, “¿Qué Nos Pasó?”, “Hoy (Cambiaremos Algo)”, and so many others... To all of that, we are now adding the song that so many fans have been waiting for; one of the live songs we are including is “Quizás” (known by fans as “Si Vuelves”), which had never been officially released until now.

This album is a state of mind in and of itself - it is vital, euphoric, the definition of optimism made sound. Guille has always had this dream in his head, and little by little he has been able to make it come to life, and we feel like we are lucky to have been able to enjoy the process. Luckily, this story isn’t even close to ending.