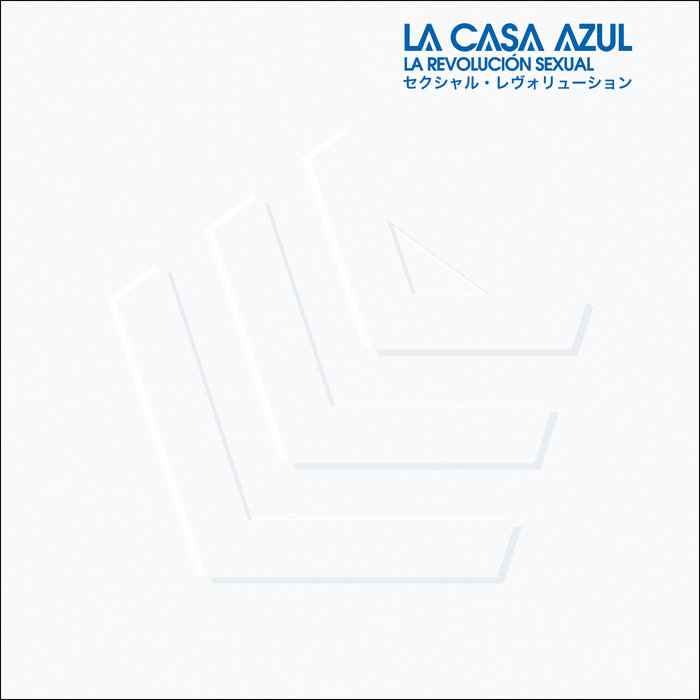 At least we can hold and touch the long awaited second album by LA CASA AZUL, and with it we can reveal one of the best kept secrets of our times. You won't believe it: the kids in the band are not human! They are humanoids, programmed by producer and composer Guille Milkyway so they can perform his high-tech, hyper vitaminated, nippon-influenced pop songs. Some did already suspect that such a thing could be possible, but most had absolutely no idea that such lovely lads as Clara, Sergio, Virginia, David and Óscar were really programmed androids under the orders of their producer's privileged brain.

They still do play, dance and sing, though, and they do it as well as they have always done. It's only that now they don't hide anymore the plugs they have in their backs and the pentagon they have in their chests, through which they receive all the needed information. Their connection gives them the energy they need -that seemingly eternal energy they have spread around the world, now we know how could they cope!- and gives them the chance to melt into one and create the most perfect harmonies, never heard by the human ear.

Under this new technological, synthetic, futuristic stylism, the songs in "La revolución sexual" fly away from Love as the one only lyrical axis and dig deeper in fear and frustration. There's also vengeance, anxiety, insecurity and the search for balance.

Musically, the songs on the new album by LA CASA AZUL are based in the same patterns that turned them into world cult artists: melodic pop songs, with catchy choruses that are easy to strum and singalong. High class pop music, that here shows itself as intentionally artificial, more made in Shibuya than ever. Songs are here maybe more complex than before, but always keeping the timeless classic pop influence that, along with its coups d'effect, sudden changes and surprising twists, describe the magical touch of the songs by LA CASA AZUL.

Nevertheless, this time everything tends to be intentionally more extreme. More clearly artificial, more made in Shibuya. Filtered voices, a huge edition work, sounds from here and there, a thousand details that make every listen entertaining and magic, keeping a delicate balance between the purest 21st century technology and the most classic songs in the history of pop music, that Guille knows so well: as if we put all the history of pop music in a cocktail shaker, without any prejudice, Japanese style. In the music by LA CASA AZUL live together without any problems 50's doo wop and 60's easy listening and 60’s bubblegum, 80's technopop, 70's disco and 90's shibuya-key and europop; references to such different yet close bands and artists as ELO, PILOT, Hugo Montenegro, PIZZICATO FIVE, Jean-Jacques Perrey, DENIM, Jacno, Enoch Light, Lio, Silvetti, The Jetset,Scoobydoo... Or to mention more contemporary names: APRILS, YMCK, PLUS TECH SQUEEZE BOX, CAPSULE, Andreas Dorau, STEREOTOTAL, HELEN LOVE, THE GO! TEAM, THE BRAN FLAKES, SCISSOR SISTERS, OPTIGANALLY YOURS...

And how does this new album sound, track by track?
Well,"La nueva Yma Sumac" is as excessive as the mesmerizing mambo muse mentioned in the title, a song that's full with crazy effects, 8bit sounds, filtered vocals, a touching chorus and a storyline that's optimistic and desperate at the same time.

"La revolución sexual"is the title of the album with a wink to Wilhelm Reich, and it takes us directly to year 78, echoing John Paul Young and Silvetti, funk brass and flutes, disco strings, europop scratches and even a bridge that reminds us of PIZZICATO FIVE.

"Prefiero no"is punk, bubblegum and 8bit in exact proportions, as a perfect definition of LA CASA AZUL. An irresistible chorus, piercing guitars and an apotheosic ending that confirm it as a bubblegum punk hymn against some empty headed media.

"El momento más feliz" is a mid tempo with a stop in Italian 70's style and clapping that could be from a record by Roger Nichols or Chris Montez. A sad song about happiness (and about Brian Wilson, and Futbol Club Barcelona).

"Mis nostálgicas manías"is an incredible, euphoric nippon-styled cocktail that takes us to the world of Hannah Barbera mixed with THE CHI-LITES and Hugo Montenegro, and "No más Myolastan" is a europop cry for optimistic rebellion, a protest song in glorious technicolour.

"Chicos malos"is speeded up europop disco, a classic track from their live sets that's finally found a place on wax. For once, the nerds win over the bad boys with the help of some violins, disco clapping and piano bits à la Jeff Lynne and ABBA.

"Mucho más de lo normal"sounds like LA CASA AZUL we all know and love to (8) bits: an optimistic song about love, with infectious harmonies, flute and perfect guitar arrangements.

"La gran mentira"is a funny doo wop ditty, short but firm in its shout against hypocrisy, and "Una cosa o dos" is easy listening for the 21st century, speeded up beats, synthetic voices, 8bit and an ultramelodic bridge that sings about being proud of one's own weaknesses.

"Esta noche sólo cantan para mí"is one of those highly emotional tribute songs to the music you love; with a disco backing reminding of ABBA or Tina Charles and a fabulous chorus, the song speaks about the shelter that is the music you dearly love: Blossom Dearie, Nina Simone, Kirsty McColl, Dusty Springfield, Karen Carpenter, Astrud Gilberto.

"Triple salto mortal"is yet another impossible Nippon-styled collage, hyper-energetic chorus, speed bossa beat, and last but not least, "Un mundo mejor" is an outward funk/easy listening instrumental, the perfect closing for a wonderful album, packed with surprises and new sensations, that is bringing us back one of our favest bands in perfect shape, totally reinvented but as exciting and fascinating as always. So glad they are back!