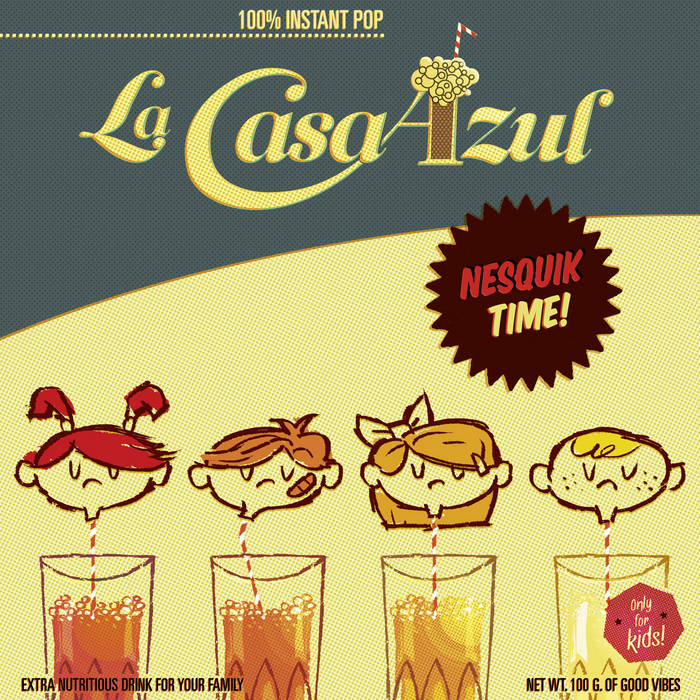 Many people know the facet of Guille Milkyway as a composer for commercials, television shows (now on televisions all over the world with “Jelly Jamm”), and movie soundtracks (with a Goya for “Yo, Tambien”). That’s why Elefant Records is going to release a very special single with the two theme songs that Guille wrote for the ad campaigns for Nesquik, in both the radio and the instrumental versions. Back in 1979, Jacno, of the duet ELLI ET JACNO (songwriters for Lio’s hit “Amoureux Solitaires”) wrote a song for Nesquik based on his big hit, “Rectangle”, a song that Guille has always liked.

Of the two songs, the first, “Échale Nesquik”, recorded in 2008, has that speedy pop sound so personal to and associated with LA CASA AZUL, and the numerous collection of arrangements that are the house specialty. On the other side, from 2012, “Somos De Nesquik” shows us a more saturated sound that is danceable and modern, with its sights set clearly on the dance floor. Further, the digital version of the single will include versions of both songs in Catalan, and some really curious additional takes, like the “Soft Piano” and the “Western Summer” versions of “Échale Nesquik”, both of which are more relaxed and which make the most of how catchy the main melody is, to give it an even more precious tone.

A juicy release for all of LA CASA AZUL’s followers, and lovers of singles with theme songs and commercials that have been popular from the 50s to the 80s, when television and radio made ad jingles and television show theme songs that were true international hits. This single is precisely homage to those singles and that spirit of advertising from those years in which the most important pop artists of the time lent their voices to the coolest ad campaigns and then released those songs as singles or 7” vinyls which were either sold or given away as special offer with the products. How could anyone in Spain forget that 7” from the very young Maríbel Llaudes (Karina) for the brand Wynn’s, those surprise Fundador singles, the orange singles from Mirinda or the incredible single with the 4 versions of the Chew Junior song that flooded homes all over Spain at the beginning of the 80s, written by Juan Pardo and sung by PARCHIS. The list is never-ending…

From the cover – with that retro touch, designed by the incredible Jean Duprez – to the musical content, this single is, as we’ve already said, homage to those great songs written especially for commercials.